So you’ve got the Ancient Ballads DLC for The Legend of Zelda: Breath Of The Wild and want to know how to get yourself a Horse that looks as rockin’ as this? 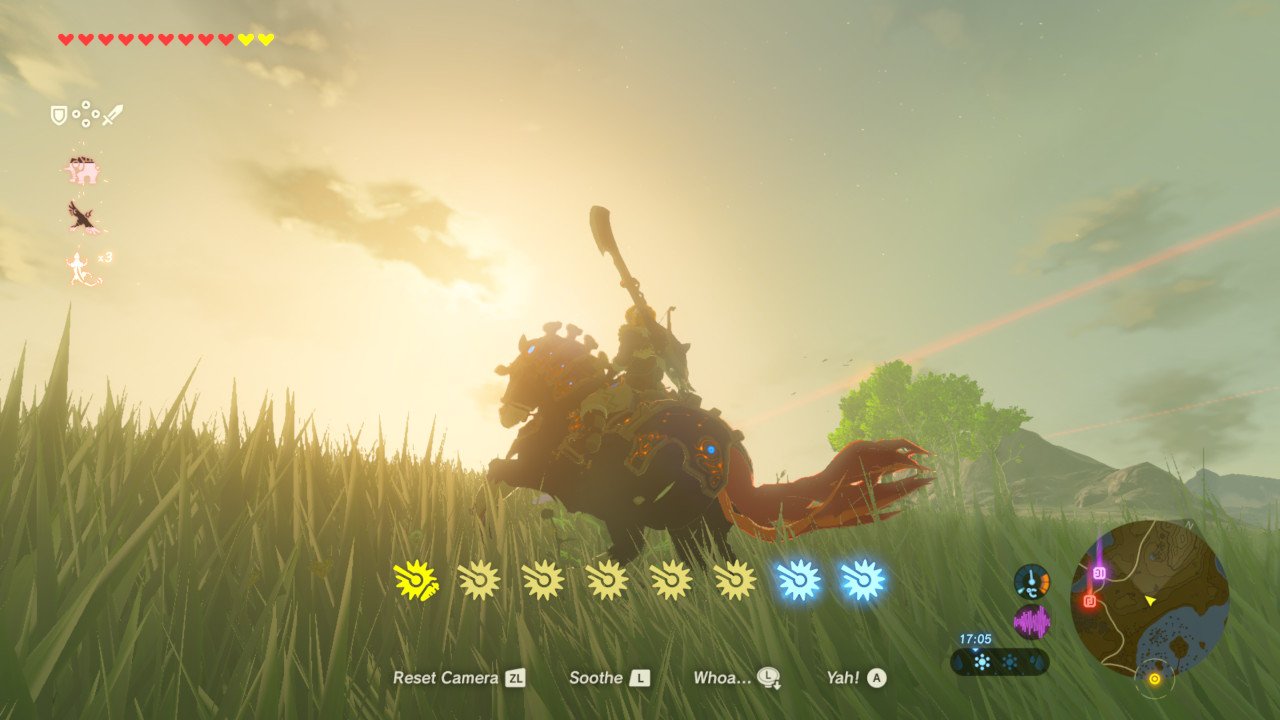 Well look no further, right here we’ll look at how to get the Armour as well as how to find a horse worthy of donning such fine equipment.

First off, you’ll need a horse. Now, if like me you’ve been using good ol’ Epona so far via the Smash Bros Link Amiibo then you’ll need to say your goodbye’s because Epona can’t be equipped with the Ancient Horse Gear, so yes you’re gonna have to run out and nab a horse real quick but hey, may as well get the best horse you can whilst doing so.

You’re going to want to head to the Taobab Grasslands towards the South West corner of Hyrule. Here if you look down into the grasslands you can spot the Giant Horse, but wait, you don’t want the Giant Horse for this armour because like Epona, he can’t wear it. If you ever do want to grab him he has unlimited stamina which is a plus, as well as so much strength he could probably plow striaght through Ganon himself buuuuut it has very low speed so not an all round great option. However! The possy of horses surrounding him are some of the most powerful in the game and if you can spot one that is a block colour instead of one with spots then you’re more likely to bag a winner. On my first attempt I grabbed a black single colour horse and he turned out to have  5 / 4 / 5 stats. So that’s 5 stamina, 4 strength and 5 speed. I figured strength isn’t too important until I finally kitted the horse with the Ancient Gear only to accidentally run into a Bokoblin who was also on a horse and have my horse collapse and die right there on the floor. It had been less than 30 seconds since I had put the armour on him… So thank the good lord for auto-saves!

So you have the horse, now you need the gear. Well, just head to Highland Stable in the South of Hyrule and read the book on the table inside and you’ll get information on how to find the two pieces of equipment. But if you’d like more help then read on!

The Bridle gives your horse two extra spurs for its stamina meter. So if you get a horse that has 5 stars in the stamina department you’re gonna have 7 in total. Which makes a big difference.

Directly West of Hyrule field and South of Hyrule Ridge is a small pond beneath a cherry blossom tree. This tree was in fact placed there in remembrance of Satoru Iwata so take a moment for him when you visit. Underneath the tree is a hidden chest, use magnesis to pull it out of the ground and access the Ancient Bridle.

The Saddle is probably the most useful out of the two and in fact I dare say it’s the best feature of the new DLC. It allows your horse to teleport to you no matter where you are. No more running around Hyrule, travel in style!

The Saddle is placed south of Highland Stable, just after the Horse God Bridge. It is actually behind the Horse God who, if you haven’t seen before acts similar to a Fairy and when paid opens and allows you to resurrect any horses that may have previously fallen in battle.

Voila! Now you should have a new speedy horse (that’s literally the name of my horse) and great Armour to ensure it’s the best damn horse in all of Hyrule. (Sorry Epona).